This is a two-part post so far. You can read the first installment here. Today the resolution of profoundly life-limiting symptoms, across a wide range of conditions, has me rethinking what dysbiosis might be. I hadn’t anticipated writing a new blog entry for Lufenuron yet, but some huge changes are happening daily. You can read about the first two weeks here.

Today is Day 15. As the candida is dwindling, symptoms of die-off returned, such as diarrhea. It makes sense, given the mix of Interfase Plus and Candizyme I am taking.

I woke with fairly loud tinnitus, my eyes were crusty with discharge (not my usual), and I just felt toxic. On the plus side, I had been feeling some pain while urinating these last few months but I’m now experiencing no prostatitis. Constipation is also no longer an issue. I’ve been having two bowel movements a day since Day 2 of Lufenuron, and my first today was a Bristol Stool Chart 5.5.

But as the day went on, I gathered steam, felt a bit better and went to a job interview. The drive over was relaxing, and I noticed even though it was hot outside, I had no heat intolerance. Tinnitus had virtually stopped by then, too.

I arrived early and parked, then noticed a bench on the sidewalk and sat down. Soon I was texting a friend, and as we chatted I realized I wasn’t the least bit sound-sensitive, which is unusual for my “post-Levaquin self“. In fact, I felt calm, relaxed, and was enjoying myself. Even a few days ago I would have felt exposed, hyper-aware of the noises around me, and been seeking the quiet of my car, with the windows rolled up. I’ve been suffering from this agoraphobia since i can remember, but I have also had candida since birth, too. 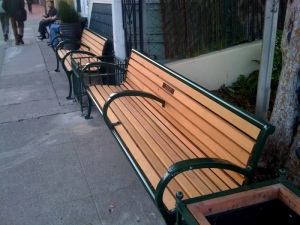 Once in the lobby of the location where I was interviewing, there I sat on the couch, leafing through magazines. I had a huge epiphany. Reaching out for a photo-book, I was filled with a pleasant curiosity as I made my way through it. This is my old self! I remember family members remarking that my personality had changed, after I got blasted with antibiotics. This felt like that happy-go-lucky, engaging fellow returning.

The interview went really well. I felt relaxed, invested in conversation, transparent, not feeling the need to sell myself, just in the moment. Driving home I was upbeat and carefree. I rolled the windows down, feeling the blast of air on my skin. No sound sensitivity, and the fresh air felt great. I sensed how stale my car was (nose working now!), just because I’ve been leaving windows up constantly to avoid noise. Yes, my whole environment will need to detox with me.

Back at my house, I leaned down to the floor and adjusted a dimmer on a light, but my heart wasn’t pounding, and I didn’t feel like I was going to keel over. CFS has been a problem for the last 5 years, and it’s definitely been improving over the last week or so, but this evening I realized POTS symptoms have been disappearing, too. I really don’t have orthostatic intolerance anymore! And as I walk around the house my whole body feels lighter, stronger.

With improved bowel transport, even SIBO might be healing, and this new found energy puts some validity in that hunch, given how tired I get when upper gut fermentation is a problem. Perhaps candida has an adaptive mechanism, disrupting the migrating motor complex so it can consume more of our food. I’ve noticed GERD is also no longer a problem, which is likely tied to this same issue of decreased gut motility. I have a very happy colon now, and am hoping a lack of fungal overgrowth could heal my ulcerative colitis for good. Fingers crossed.

The wide range of improvements is impressive. I have to wonder, how many of us with POTS or SIBO are really just experiencing the neurological impairment caused by candida flourishing in our bodies, and its endlessly dumping of 79 toxins into our bloodstream? How much of being “floxed” (poisoned by fluoroquinolone antibiotics) relates to fungal overgrowth? And how many of us who became introverted, or prone to anxiety, after this gut flora damage — are we experiencing the same toxicity?

Day 15 of Lufenuron and yes, I feel pretty good.

I should add my point is not to recommend the use of Lufenuron, but rather, I think we need to pay close attention to fungal overgrowth, and relentlessly rid the body of candida however we can. In my case it appears to be making a huge difference.

UPDATE: I tried Lufenuron three times, and while the first dose provided incredible relief, when I took it again one month later it was only half as effective as it had initially been, and by the third dose, another month after that, it barely had an impact on my fungal overgrowth at all. This was despite mixing it with herbals.

Luckily I learned something valuable from the experiment: it seemed my immune system was the problem, so I began looking for something that could boost my body’s innate ability to fight candida. That led me to iodine, and a potential connection between fluorquinolone antibiotics, like Cipro and Levaquin, and hypothyroidism. Here’s the first installment of my iodine protocol. You’ll find the second article here. So far the results have been really encouraging, and unlike Lufenuron, iodine is both inexpensive and subject to much greater testing in humans.

If you enjoy this blog, you can support my work by buying things you need via this amazon portal HERE, or by purchasing any product linked in articles. It costs you nothing extra, and helps me continue writing. Thanks!