A month or so ago I was feeling “okay” but not great. Ever since I was given Levaquin antibiotics in the ER for food poisoning, about 4 years ago, I’ve had CFS/ME, brain fog, tinnitus, POTS, SIBO, food intolerance, asthma, ulcerative colitis, sinus and skin issues, depression/anxiety, rising blood sugar and constipation.

Does this sound familiar to any of you? What’s the common thread?

I’ve had fungal overgrowth, inside and out, for years, made much worse by broad spectrum antibiotics. Doctors shuffle me out of their offices when I ask for Nystatin powder, or other prescription antifungals, despite having obvious plaques on my scalp, feet, face, chest and groin, plus sinus and lung irritations consistent with candidiasis.

I have tried my best to control it with diet and herbals, like olive leaf, pau d’arco, grapefruit seed extract and berberine. It’s a chronic infection, so I’m slowly feeling worse and worse. Recently, even downing healthy amounts of cultured veggies and homemade kefir (both are powerful probiotics) hasn’t been very effective.

Flash back to a month ago, all it took was one starchy lunch that fed candida and i got horribly ill. I had GERD, muscle spasms, insomnia, asthma. In the days that followed, I knew I needed to do something more drastic to get the upper hand. Colloidal silver was helpful, but not something I wanted to take longer term. I heard about Lufenuron in an online forum. Not for human use, this chitin-inhibitor dissolves flea eggs, and… the outer shell of candida. Mammals don’t have chitin, so it’s apparently safe for dogs, cats and (theoretically) people.

It’s typically given for the first week of every month, daily, with a high fat meal (so it will deposit in tissues and be slow-released, rather than quickly leaving via the GI tract), then for the remaining 3 weeks of each month it goes to work destroying fungal overgrowth. 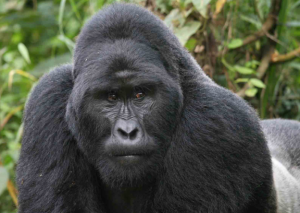 Yes, humans aren’t supposed to use it, but there’s nothing stopping anyone from treating their gorilla, so that’s what I set out to do. Curiously, ever since i gave my pet ape pure Lufenuron, we both started to feel much better.

This is my record of that adventure, which will be updated periodically:

Day 1: dosage was 2 grams, and by the middle of Day 2, a major burst of mental clarity occurred. By that evening, the ability to sleep deeply had returned, to the point of waking on Day 3 — after 10 hours with no dreams, out like a light — and muscles felt much less sore, plus joint pain had disappeared.

To reiterate: during a 7 day total treatment “loading” window, 2 grams were administered daily, with a high-fat meal.

By Days 4 and 5, die-off symptoms emerged, which is not surprising, and lasted until Day 12: diarrhea, blurred vision, fatigue, insomnia and body aches. The good news: no more constipation, but it took 10 days for die-off to subside, and detoxing continues.

Day 13: colon inflammation is gone, and a healthy, sometimes ravenous appetite has emerged. I’m finding I don’t have to manipulate my neck as much to relieve POTS symptoms. I also think my tinnitus is a little better. It comes and goes, but I have more moments of silence.

Today, Day 14, upon waking, the gorilla is quite spunky, feeling like a randy teenager (Lufenuron might replace Viagra), and in the afternoon, muscles unwind in a characteristic activation of the parasympathetic nervous system, as nap time beckons. The vagal nerve is working now, which is intriguing! Was candida to blame for it running amok? It’s amazing how long, hot showers are enjoyable again (for my monkey). Relaxation is happening; anxiety is disappearing. There’s no more being stuck in fight-or-flight mode.

Healing like this is emotional, but “joy” hasn’t returned yet. My gorilla is still waiting for that.

By the way, people should not treat their primate’s flea problem with pure Lufenuron unless they’ve consulted a veterinarian, and should never treat themselves using medication not approved for humans. In fact, any and all new treatments contemplated should first be discussed with a physician. Please see the disclaimer.

With that said, CFS symptoms are improving, POTS also, along with so much more. Go, monkey, go.

UPDATE: I tried Lufenuron three times, and while the first dose provided incredible relief, when I took it again one month later it was only half as effective as it had initially been, and by the third dose, another month after that, it barely had an impact on my fungal overgrowth at all. This was despite mixing it with herbals.

Luckily I learned something valuable from the experiment: it seemed my immune system was the problem, so I began looking for something that could boost my body’s innate ability to fight candida. That led me to iodine, and a potential connection between fluorquinolone antibiotics, like Cipro and Levaquin, and hypothyroidism. Here’s the first installment of my iodine protocol. You’ll find the second article here. So far the results have been really encouraging, and unlike Lufenuron, iodine is both inexpensive and subject to much greater testing in humans.

If you enjoy this blog, you can support my work by buying things you need via this amazon portal HERE, or by purchasing any product linked in articles. It costs you nothing extra, and helps me continue writing. Thanks!