It’s now day 16 of my iodine protocol. Those who follow this blog remember when I tried Lufenuron, an antifungal not approved for human use, for advanced candida overgrowth. The first month it worked wonders, the 2nd it had only a partial effect, and by the 3rd dose Lufenuron had no effect at all. Disheartening, yes, but that brief success taught me how many of my symptoms were from fungal overgrowth: intense fatigue, tinnitus, SIBO, anxiety, skin breakouts, sinusitis, and several other seemingly disconnected problems.

Iodine, taken orally, is every bit as effective for me as Lufenuron was, even more so, plus its potency against candida has remained constant. And here’s a milestone: my ulcerative colitis symptoms are completely, utterly gone. Not a trace of inflammation in my colon, not a speck of bleeding, despite sprinting to the loo during a characteristic iodine detox.

Flash back 3 weeks ago, hearing of a friend’s success with an iodine protocol came at the perfect time. The doses involved in this approach were shockingly high to me, compared to the usual orthodoxy. I had heard a bit already about iodine’s impact on chronic infections, and hoped it might halt the steady worsening of candida I experienced when Lufenuron failed. I really felt it tugging me down quickly this time, no matter how many herbals I threw at it.

That’s all changing now, after beginning my own protocol. I started gently, with just one drop of Lugol’s 2% Iodine solution, which is 2.5 mg, or 2,500 mcg (about 1.66X the RDA of 1,500 mcg). Even that relatively small initial dose had a profound effect.

I’ve been carefully ramping the dose in the days since, and am now peaking at 5 drops, or 12.5 mg, averaging around 3 drops, or 7.5 mg. Many suggest this “pulse dosing”, which includes two or three days off, after every 5 days on, so the body can effectively detox. Overall, it’s really working. In fact, I have fewer symptoms of candidiasis now than prior to my last dose of Levaquin antibiotic.

The first major benefit I noticed from iodine was improved sleep patterns, and this has continued to be wonderfully deep and restful, dream-filled sleep. Then there’s relief from my sinusitis, which began to happen in the initial two weeks of oral iodine supplementation. By now I can eat as many potatoes, rice, even sweet potatoes, as I dare, and my sinuses stay clear (historically, carbs have been a trigger). I no longer wake up with brown mucus, that odd “beery” smell of fungal sinusitis, which first started around 1995.

While I usually just take the Lugol’s in water (see below for details) and drink it down, I’ve even been making an iodine nasal spray, too, used every 3 or 4 days, because I want to cure the problem once and for all. I empty out a nasal spray bottle, then add a bit of Lavi Wash to create saline, with 2 drops of Lugol’s 2% Iodine. I mix this with about 8 oz distilled water, add some into the spray bottle, and keep the rest in a glass container with a plastic lid in my refrigerator.

The nasal spray is totally optional, for dealing with fungal sinusitis only. The main protocol is simply taking your iodine in water, according to whatever dose your doctor recommends.

Note: before trying anything iodine-related, it is important to consult with a physician or naturopath familiar with thyroid issues, who can perform adequate testing to establish your baseline function. Make sure you try a tiny amount of iodine on your wrist first, where it can be washed off should you react. Some people experience a rush of energy. Keep in mind even sinus rinses contribute to your total iodine dose, not just oral use. Also be cautious about measures, as people outside the US are often using a far stronger form of Lugol’s (5%). This means drop-for-drop what seems like the same Lugol’s brand can be quite different.

Okay, let’s rewind a bit — it all started on 11/5/14. After the first dozen days straight, I only took one day off, and I’ve been at it daily ever since. My dosing has varied from 1 drop of Lugol’s 2% solution taken orally (2.5 mg iodine) to 5 drops (which supplies 12.5 mg) depending on my response/detoxing. Unlike pulse dosing, I am in a saw-toothed pattern of nudging it up, dropping it down, then bumping it up again, without many breaks. I just listen to my body as I go, and try not to push too hard.

Since my last blog entry, a fairly intense release of toxins has continued, but it’s now getting much better, with only occasional GI upset, and my last dose of 12.5 mg is only a bit lower than a brief peak of 17.5 mg. That dose felt a tad high, so I backed off. Simple enough.

Iodine detoxing is no fun. At worst, probably 5 trips to the bathroom for me, from morning to noon. I felt fine initially, but by mid-day my muscles were getting a bit stiff from mineral loss. I’ve had low potassium in the past after dehydration, so I took a blend (calcium, magnesium, potassium) called Trisalts (2 one-half teaspoon doses that day) and felt a lot better. I may have been deficient in all three minerals, although I’ve been supplementing a lot of magnesium for companion nutrients (highly essential), along with my selenium complex (200 mcg), a b-complex specific for iodine protocols, and vitamin C.

I also add a bit of trace minerals to my distilled water, and I never, ever drink tap water. Toothpastes with fluoride are equally bad — I really hate the idea of ingesting more fluoride when I’m trying to free up my iodine receptors from — fluoride, chlorine and bromines. 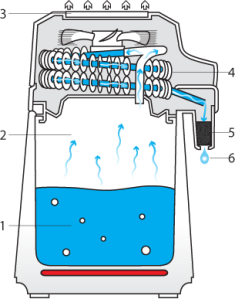 I have a water distiller in my kitchen, and it’s been running a few days a week for the last 4 years. The only downside is the fan noise, but it has paid for itself. In my area there have been reports of ground water contamination, and I do know a type of fluoride is added to the municipal water supply, in addition to a few new chemicals that are supposed to be “better” than the old decontaminants, like chlorine (another halide that blocks iodine) but who knows?

A detox requires pure water to restore what’s getting flushed out, but decreasing diarrhea after week 3 suggests iodine has already managed to remove a lot of toxins, such as fluoride, bromines, and mercury (I have a lot after eating fish 5 days a week, from my youth into my 30s). What I’ve got now is the healthiest gut I’ve had in a long time, and I’m feeling greater benefits from ferments, like kefir and sauerkraut. In pre-iodine days, I knew kefir was good for me, but it made my SIBO worse, and it seemed no matter how much I drank, candida was always one step ahead.

How could iodine be doing so much to heal chronic candida overgrowth? Iodine on its own has an antifungal quality, which explains why it’s clearing SIBO in the upper gut. If the entire GI tract is being rid of fungal pathogens, it’s easy to see why constipation is totally healed. If byproducts of that fermentation are no longer polluting the bloodstream, autonomic activity should benefit, so peristalsis will become more vigorous, and mental health should improve, too.

But more important appears to be iodine’s affect on thyoid and gut health, its ability to free up those iodine receptors and allow nutrients from oral supplementation and food sources to be better utilized, in key aspects of biochemisty. It’s a powerful immune boost.

While I do still have some fatigue, everything is working better. My mood is upbeat, I have a libido again, and feel a general ambition. My mind is much quicker. I even notice as I’m typing this my eyesight is incredibly sharp (no glasses anymore!) and my fingers are flying along the keyboard.

Since my initial post on this subject, the Iodine for Fluoroquinolone Toxicity group on Facebook is in full swing. We’re learning how sensitive we are to iodine, even the co-supplements. This means the 12.5 mg iodine used in typical protocols is way too high for all of us “floxies”. My suggestion would be to go slowly, even less aggressively than a physician might recommend, if you feel your body is struggling to detox. One group member likened a floxie starting iodine to a very dry sponge being suddenly inundated with water — at first we aren’t able to grab much at all, but over time we can absorb, and really benefit from, therapeutic doses.

Speaking of, how much iodine do you think is “enough”? There are at least two distinct camps, in iodine supplementation circles. Some say micrograms, some say milligrams. Let us know where you stand, in the comments section.

For now I’m favoring the middle way — one foot on the brake, the other on the accelerator — and it’s an interesting ride.

If you enjoy this blog, you can support my work by buying things you need via this Amazon portal HERE, or by purchasing any product linked in articles. It costs you nothing extra, and helps me continue writing. Thanks!